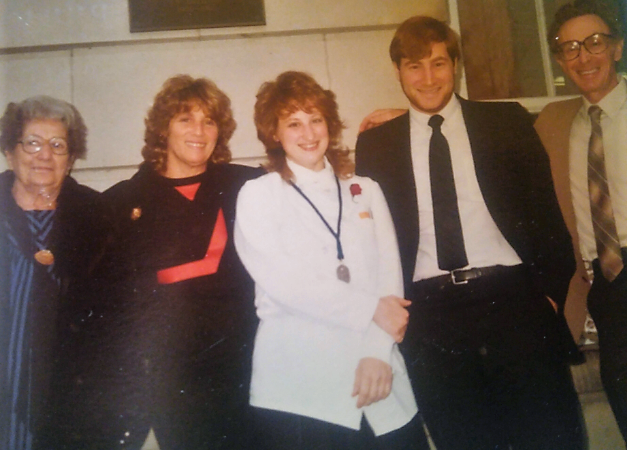 After closing the bakery I decided that if I really wanted to live the life of a chef I’d better learn the right way to do things, before bad habits had a chance to set in. I applied to the Culinary Institute of America in Hyde Park, was accepted, and left New York City, and my apartment, to Howard. I haven’t lived in New York since. I love it more than any other place on earth but I realized that running a business there is expensive, incredibly anxiety provoking, and more difficult than I was willing to accept. Living in New York is for young people and very rich people. Starting a business and raising kids there was just too intimidating for me. Richard and I would love to move back to NYC when our kids have gone on to their own lives and when, and if, we ever have the financial means.

I loved the CIA, it was hard work, but actually very restful after four crazy years in NYC. I learned a huge amount about classic French technique, speed, knife work, discipline, clarity of flavor, organization. At that time, in the early 1980’s, cooking was just beginning to be a respected profession. The category “Celebrity Chef” was brand new, there was no Food Network and the CIA was just becoming more than a training school for ex military. I was a bit older than most of my classmates and had no interest in campus social life so I lived off campus in a tiny two room apartment on top of a firetrap of an old wood frame house a mile away. I drove to my parents’ house on weekends, about an hour away, and worked at an upscale deli/bakery nearby.

I had already been through enough life experience that the older, male European chefs did not bother me much. Sexism was rampant then, as was a whiff of left-over anti -Semitism. There were affairs between the male staff and some of the younger, less secure female students. Screaming fits were an everyday occurrence and the day that no chef-instructor spit food into your face while yelling and turning purple with rage was a good day. At that time there were only two female chef instructors on staff, both youngish and American. They seemed to be trying to prove that they could be just as tough as the men.

After finishing my first semester I spent six months in Los Angeles doing a required externship. I had been hired to work at Ma Maison, a well respected, celebrity packed French restaurant, owned by Patrick Terrail, whose family owned the most well known restaurant in Paris. Wolfgang Puck, the previous executive chef, had recently left to open Spago. The chef who succeeded him had just been arrested for murder. It was an interesting place to work, but I was only there for a couple of days before Patrick realized that I had some pastry skills. He sent me off to be the opening pastry chef at his new venture, the Burbank Riding and Polo Club. I was cooking for William Shatner (endearingly polite, adored his wife), Sylvester Stallone(wore a floor length chinchilla coat in 90 degree heat), and all the big 1980’s stars who kept their horses at the club. The facility was so new that there was no kitchen, but by now I was used to cooking in strange and difficult conditions. Most of my prep was done on a loading dock. Sometimes I finished pastries in one of the two refrigerated trucks pulled up to the dock. I learned a lot from the talented Mexican cooks who did most of the work in the kitchen. I slept in my car in the parking lot from Christmas Eve to New Year’s day in order to get the work done for the endless Hollywood holiday parties. From the head chef I learned how to stay awake for 48 hours with the help of illegal pharmaceuticals, a skill I (thankfully) never used after that time.

Between the oddball L.A. characters and the pharmaceuticals the six months went by very quickly. I celebrated my birthday working at the Polo Club. When the handsome policeman walked into the kitchen I thought we were all about to be arrested for various reasons (and there were plenty of good reasons!). When the music started and he began to strip, I realized that my L.A. friends knew just how to bring the maximum amount of color to my face. I went back to school with some sadness and a large measure of relief at having survived my externship.

After graduation I was recruited for a job as assistant room service manager at the Hyatt Regency in New Orleans. I had only been to New Orleans once before for a few days, and I was attracted by the idea of a new place that was completely foreign to me. I loved the music and the food. Paul Prudhomme had just introduced a refined version of Cajun and Creole cuisine at Chez Paul in the French Quarter, Emeril Lagasse had opened his first restaurant and New Orleans was very much on the foodie radar at that time. When the Hyatt came to CIA to recruit I realized that this was my opportunity to experience something exciting and exotic. I also knew that eventually I wanted to have my own business again and the management training and experience that I was being offered could be invaluable.

I was 28 years old when I arrived at the Hyatt. My first day there I realized that I was in deep trouble. I was introduced to my staff: thirty young to middle-aged locals born and raised in New Orleans, all very experienced room service waiters, all of whom had been passed over for this position in order to make way for me, a young, white, inexperienced, Yankee Culinary school graduate. They knew I had no business being there, and so did I. They wasted no time in teaching me how little I knew. They knew exactly which orders were likely to result in the best tips and how to jump the line in order to get those assignments. They knew how to turn on the Southern charm to cover up issues and problems that always resulted in me getting in trouble and being reprimanded by the Food and Beverage director. I was essentially clueless about what was going on and I never really learned how to effectively manage these people who knew so much more than me about this job.

Having failed to do the assistant manager job well I was promoted (of course!) to be the manager of a small restaurant in the atrium of the hotel. I did better, as I had a younger, smaller and less experienced staff and could pretty much stay on top of their shenanigans. We had an early version of a projection large screen television in the front of the restaurant, and it was here that the entire staff and many of the hotel’s guests stood and watched the Challenger explode on that gorgeous clear morning in 1985. I stayed for a total of two years, learned a lot, loved New Orleans and its food and music as much as I thought I would, but eventually decided to try to get back to the north where I belonged. The weather was killing me: 9 months of hot and humid, three months of damp and chilly. From March through October I would leave my air conditioned apartment, enter my air conditioned car parked just outside the front door and drive the 5 miles to the Hyatt. After parking in the lot and walking into the hotel I was dripping with sweat inside my 1980’s style shoulder padded suit jacket.

I also missed cooking, though I certainly ate well, and learned as much as I could about the fantastic regional cuisine. This recipe for a classic Cajun style Gumbo has followed me from New Orleans through every restaurant that I’ve cooked in since.

The Secret to this dish is the dark red-brown roux. It may take a few tries making this dish to become brave enough to let the roux get really dark, but the flavor won’t be authentic unless you stop just short of burned. The other “secret” is the holy trinity of vegetables-onion, celery and green bell pepper, which is the flavor base of all Cajun and Creole soups, stews and etouffes. Use a good quality andouille, but you can substitute a spicy chicken sausage(if you must). This is a great meal in itself with a hunk of cornbread or some white rice served on the side.

For Roux: Heat oil in a lg cast iron skillet(at least 10 inches) or heavy bottomed frying pan until just before smoking. Add flour and stir constantly for a minute to blend. Turn down heat to low and continue to stir until roux turns the color of coffee with a little milk(dark reddish brown). Be patient, you want to stop just before it seems burned.

Turn off heat and immediately add onion, peppers, celery and garlic to roux. Stir one minute. Add Cajun seasoning and stir until combined. Scrape into 2-3 gallon soup pot. Add tomatoes. Turn heat up to medium and cook, stirring for a minute. Slowly add stock or broth, stirring, until smooth. Bring to boil, then turn down heat to low simmer and cook for approx. 30 minutes. Add Andouille and chicken and warm through. Add salt and hot sauce to taste.

Read our blog to find out what's new at Casa Papaya!